Hernán Mauricio Romero Profesor Asociado, Departamento de Biología Universidad Nacional de Colombia
Sap flow sensors were installed on the leaf petioles of 5-year-old oil palms (Elaeis guineensis Jacq.) to measure the xylem water flow for 12 days based on the heat ratio method (HRM). It was found that young leaves have higher sap flow rates, reaching values of over 250 cm3 h-1, and that sap flow fluctuations are directly related to weather conditions, particularly the vapor pressure deficit (VPD) component. It was observed that the sap flow rates remained constant and very close to 0 cm3 h-1 between 18:00 and 6:00 h and that the upward and downward movement of sap was faster during the day, with peak levels between 9:00 and 16:00 h. Under the evaluation conditions, the oil palm crop transpiration was estimated to be 1.15 mm H2O/ha-day. The HRM is a highly repeatable method and an useful tool to quantify the total oil palm transpiration. It could potentially be applied to irrigation.

Sap flow sensors were installed on the leaf petioles of 5-year-old oil palms (Elaeis guineensis Jacq.) to measure the xylem water flow for 12 days based on the heat ratio method (HRM). It was found that young leaves have higher sap flow rates, reaching values of over 250 cm3 h-1, and that sap flow fluctuations are directly related to weather conditions, particularly the vapor pressure deficit (VPD) component. It was observed that the sap flow rates remained constant and very close to 0 cm3 h-1 between 18:00 and 6:00 h and that the upward and downward movement of sap was faster during the day, with peak levels between 9:00 and 16:00 h. Under the evaluation conditions, the oil palm crop transpiration was estimated to be 1.15 mm H2O/ha-day. The HRM is a highly repeatable method and an useful tool to quantify the total oil palm transpiration. It could potentially be applied to irrigation.

Oil palm cultivation in Colombia has grown significantly in recent years (Fedepalma, 2014), with a planted area of 450 thousand hectares distributed in different regions of the country. Oil palm requires large amounts of water for good production (Corley and Tinker, 2003; Paramananthan, 2003; Carr, 2011) assuming an average water requirement of 6 mm per day. However, the measurements used to determine the overall transpiration rate of oil palm have been based on allometric parameters (Kallarackal et al, 2004; Legros et al, 2009) or on gas exchange measurements (Suresh et al., 2010; Rivera et al., 2012; Suresh et al., 2012). All of these studies have allowed us to partly understand the water demand of oil palms under different controlled conditions; however, the water requirements of oil palm in the field are not well known. Therefore, it is necessary to take direct measurements to determine water use under field conditions over time.

Different measurement methods have been used to quantify the transpiration of plants, including the estimation of water use based on water balance and measurements of precipitation, drainage and changes in the water reserve available to plants (Ruiz-Peñalver et al, 2014), along with the lysimeter method, which, for perennials, requires a large infrastructure, such as that used in the study conducted on date palm (Tripler et al., 2012). However, even though this method has been improved, the size of the plant is still a major limitation. For smaller species, inexpensive lysimeters can be used, as reported by Ruiz-Peñalver et al. (2014). Another method used is the Granier method (Granier, 1987) and its modifications (Burgess et al, 2001), a technique that measures sap flow rates and the volumetric flow of water in xylem tissue with a short heat pulse as an indicator. This is performed by measuring the ratio of the amount of heat transported to two symmetrically arranged temperature sensors to calculate the quantity and direction of the water flow (Smith and Allen, 1996; Bleby et al, 2004). Research with sap flow meters has been corroborated by other techniques, such as the lysimeter and water balance, with a high correlation between the different techniques. These results show the usefulness of this technique (Trcala and Cermák, 2012; Langensiepen et al, 2014).

The aim of most of the studies that used the heat pulse method was to determine the water balance and flow of assimilates, such as the study by Haijun et al. (2015) under mesh-house conditions, in which the total transpiration of banana plants was determined. Based on information provided by the device, they were able to determine the water demand of the plants and, therefore, the optimum irrigation schedule to prevent water stress. The same has been done with cacao (López-López et al. 2013) and eucalyptus (Bleby et al., 2012); various studies were able to determine and quantify the sap flow rate with a high degree of accuracy using the heat pulse method.

The aim of this study was to measure the total transpiration of a commercial oil palm plantation under field conditions. We examined climate variables in order to understand which of them play significant roles in transpiration fluctuations. Furthermore, we studied the influences of leaf age on whole plant transpiration. The results have a potential to be used as a decision making tool in water management and supply under a precision agriculture scheme.

Location of the study area

This study was conducted in the Palmar de la Vizcaína Experiment Field Station, Santander, Colombia (6°58' N; 73°42' W), at an altitude of 140 m, with 75% relative humidity and 32°C of average daily temperature. Five years-old oil palms (Elaeis guineensis ) arranged in a 9 m wide triangle were selected for evaluation in a 10-ha lot planted in 2011.

During the months of the study, the average rainfall was 280 mm.

The heat ratio method (Bleby et al., 2012; Hölttä et al, 2015) was used to measure the sap flow with SFM1 sensors from ICT International (Australia). These sensors consisted of three needles. One of the needles generates a heat pulse, and the other two are each fitted with two thermocouples (Fig. 1). Three sensors were installed in each palm, in leaves 9, 17 and 25, just before the rudimentary leaflets. The information was recorded every 10 min. throughout the day for cycles of 12 d, which is the time that it takes for the leaf to change positions in the phyllotaxy of the palm. The heat pulse used was 35 J, a value found in previous settings (data not shown). Additionally, tissue samples were collected from the petiole base to determine the leaf tissue thermal diffusivity constant by measuring the wet weight, dry weight and volume of fresh tissue. The heat ratio method (HRM) measures the ratio of the increase in temperature, following the release of a pulse of heat, at points equidistant downstream and upstream from a line heater. Heat pulse velocity is calculated as:

Where k is thermal diffusivity of green (fresh) wood, x is distance (cm) between the heater and either temperature probe, and v1 and v2 are increases in temperature (from initial temperatures) at equidistant points downstream and upstream, respectively, x cm from the heater. The probe positions relative to the heater used with the HRM are -0.5 and 0.5 cm, hence x = 0.5 cm.

The sap flow data were analyzed with SapFlowTool 1.4.1 software from ICT-International / Phyto - IT (Australia). The daily flow and water consumption accumulation over time were calculated to estimate the total transpiration. The data were statistically analyzed with SAS software, the statistical assumptions (homogeneity of variance, normal distribution and randomness) were tested. In order to determine the differences between the palms and leaves, Anova, Duncan's multiple range test, and multiple regressions associated with weather data were performed.

During the sampling days, the soil water potential was constant in a range of -0.1 to -0.2 MPa, and the sap flow showed no significant difference in any of the evaluated palms. However, differences were found between leaf 9 and leaf 25, where leaf 17 had an intermediate value between them. A similar pattern was found in each of the sampled leaves (Fig. 2), where the sap flow rate ranged from 10 to 20 cm3 h-1 overnight - from 18:00 HR to approximately 6:00 HR - increasing 20-fold 2 h after the arrival of the first rays of light (Fig. 2A). The highest flow rates occurred between 9:00 and 16:00 HR (220 cm3 h-1), with fluctuations between 20 and 40 cm3 h-1. At 16:00 HR, the flow rate started to decrease, reaching the lowest values after 18:00 HR; this cycle repeated every day during the sampling period. Additionally, a reduction in the sap flow was observed after day 7 of the evaluation, associated with a decrease in vapor pressure deficit (VPD).

The results are similar to those found in pindo palm (Madurapperuma et al., 2009), pine (Chang et al., 2014) and wheat (Langensiepen et al., 2014), among other species. Daily fluctuations are directly associated with soil water conditions and weather variations that influence gas exchange in plants. For example, in jujube (Chen et al, 2014), a reduction in soil water potential and change of meteorological factors caused a direct response in photosynthesis and transpiration rates, which was reflected in reduced sap flow. We found that sap flow rates are closely related to weather variables (Fig. 4), where the vapor pressure deficit (VPD) was the most correlated factor. These results are similar to those reported for oil palm in Indonesia (Niu et al., 2015). A multiple regression was also performed, taking into account the main components (AT, PPFD and VPD) (Fig. 5), in which a high linearity was found. However, it is necessary to include other variables to complete a predictive model for irrigation, as was done for jujube and banana (Lu et al., 2002; Haijun et al., 2015; Chen et al, 2014).

Based on the water flow data, including 33 leaves, our estimates of whole-plant water use were calculated as the sum of the rates from individual leaves, which is necessary and useful to assess canopy variability. We found that water use per palm was substantially higher in young leaves than in older leaves. The estimated water consumption per palm was 80.5 L d-1, for a transpiration of 1.15 mm d-1, very similar to the value reported by Niu et al. (2015). In the literature (Mutert et al., 1999; Corley and Tinker, 2003), the estimated values based on evapotranspiration and allometric calculations are higher, possibly because those estimations do not directly measure plant water consumption.

The analysis of sap flow measurements showed that each leaf had a different water consumption rate, and young leaves had higher water consumption values. This monitoring allowed us to determine that, for the measurement conditions, the transpiration of one hectare of oil palm was 1.15 mm d-1. The sap flow rates in the oil palm were closely related to weather variations, particularly vapor pressure deficit, VPD, which is the variable that best explains the fluctuations in water movement in oil palm. Additionally, measurements showed high repeatability using the heat ratio method (HRM) of ICT-International (Australia). However, it is necessary to assess the crop in different seasons to determine water requirements during the dry season and to integrate crop transpiration data with the evapotranspiration data of the ecosystem.

This work is licensed under a Creative Commons Attribution-NonCommercial-ShareAlike 4.0 International License.

Reproduction and quotation of material appearing in the journal is authorized provided the following are explicitly indicated: journal name, author(s) name, year, volume, issue and pages of the source. The ideas and observations recorded by the authors are their own and do not necessarily represent the views and policies of the Universidad Nacional de Colombia. Mention of products or commercial firms in the journal does not constitute a recommendation or endorsement on the part of the Universidad Nacional de Colombia; furthermore, the use of such products should comply with the product label recommendations. 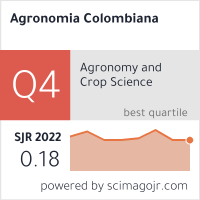