59 accessions of the American oil palm, also known as Noli palm, were characterized in the Research center El Mira of Corpoica –Colombia. Based on 13 qualitative descriptors, in order to identify genotypes with desired traits for use in the breeding program. The multiple correspondence analyses allowed to identify five factors which express 100 % of the collection variability. The affinity hierarchical classification identified four groups by descriptors action: form of reproduction, unripening fruit bunch color, ripening fruit bunch color, fiber percentage in the bunch and bunch exhibition percentage. 97.3 % of the palms, performs a prostrated stem, 100 % of total population, performs inserted leaflets in single plane. In the palm collection work, the color of unripe fruit bunch type green, represents the 4.5% of the population, 5.3% of the palms are prolific type and 6.4% performs a hermaphrodite flowering stage. No androgynous palm inflorescence were recorded. 87% of the palm collection have allowed to establish inflorescence with 25% of enclosure fibers, which represents 75% bunch exposure. These two traits, allows natural pollination and valorization of E. oleífera genetic resources which will be essential for the development of oil palm cultivation and breeding of the species.

59 accessions of the American oil palm, also known as Nolí palm, were characterized in the Research center El Mira of Corpoica -Colombia. Based on 13 qualitative descriptors, in order to identify genotypes with desired traits for use in the breeding program. The multiple correspondence analyses allowed to identify five factors which express 100 % of the collection variability. The affinity hierarchical classification identified four groups by descriptors action: form of reproduction, unripening fruit bunch color, ripening fruit bunch color, fiber percentage in the bunch and bunch exhibition percentage. 97.3 % of the palms, performs a prostrated stem, 100 % of total population, performs inserted leaflets in single plane. In the palm collection work, the color of unripe fruit bunch type green, represents the 4.5% of the population, 5.3% of the palms are prolific type and 6.4% performs a hermaphrodite flowering stage. No androgynous palm inflorescence were recorded. 87% of the palm collection have allowed to establish inflorescence with 25% of enclosure fibers, which represents 75% bunch exposure. These two traits, allows cross-pollination and valorization of E. oleífera genetic resources which will be essential for the development of American oil palm cultivation and plant breeding of the species.

The genetic diversity of plant species is being threatened by habitat loss, global warming, overexploitation and population growth. These factors are constantly increasing. The conservation of plant genetic resources takes importance worldwide and remains a concern to keep the highest number of species conserved not only in its origin center, but also in those places where their use has economic importance or economic potential (Sevilla, 2006). Therefore, the proper characterization of cross - pollination populations and ex situ collections, have allowed to identify interest traits to plant breeding and important tools which will optimize conservation and identification of valuable American oil palm genotypes. Globally, there are about 2600 species of palms, distributed in tropical and subtropical ecosystems. These are one of the most important non-timber forest resources used for housing construction, tool making, craft production, as a food source and the production of edible oils. In addition, these species are distributed from sea level up to 3000 m. a. s. l. (Dransfield, Uhl, Asmussen, Baker, Harley, & Lewis, 2008). The Nolí palm belongs to Arecaceae family, is a native plant from South America and Central America. In Colombia, it is scattered on the north coast (Valley of Sinu), throughout the Magdalena river region, from San Alberto (César) to Lérida (Tolima) (Ooi, Da Silva, Müller, & Nascimento, 1981; Seng 1983; Dransfield et al., 2005).

The aim of this research was to characterize 59 accessions from the Nolí palm of the Corporación Colombiana de Investigación Agropecuaria- Corpoica, collection work with thirteen (13) descriptors, in order to identify genotypes or group of genotypes with desired traits for use in American oil palm breeding program.

The research was carried out at the "El Mira", Corporación Colombiana de Investigación Agropecuaria- Corpoica, located in Tumaco -Nariño, Colombia, at 16 m. a. s. l., the area is characterized by bimodal rainfall regime. The Nolí palm work collection was planted in 1977, consists of 59 accessions generated among selected palms in Valle del Sinu, Cereté, Córdoba, of which 11 were obtained by autopollination, 10 are open pollinated and 38 come from controlled crossing. Of these 59 accessions, 21 belong to the system of Corpoica germplasm banks. The work collection represents a total of 1600 plants, from which 828 plants perform significant matches with the evaluated experimental population.

The matched collection work were further classified into each accession, 6 palms were characterized with two or three repetitions per accession, based on 13 qualitative morphological descriptors including the form of reproduction (Table 1), to perform their function of evaluated materials in field conditions throughout regular visits.

The viability is greatly affected by quality of the observations resulting from plant structures and visual description. The color variable was measured with reference to the color chart proposed by Munsell plant tissue color charts.

In addition, traits were encoded to convert them into numeric variables, in order to perform Multiple Correspondence Analysis (MCA). The modal characteristics in the 6 evaluated American oil palms. With the array of traits and accessions, we proceeded to stablish the MCA and construction of the genetic distances dendrogram with SAS 9.3 software(r).

The morphological descriptors is frequently used to determine accessions of the work collection. In full plant breeding program, Corpoica, typically produce palms which perform the following traits: immature fruit color status from yellow (2.5Y7/6) to mustard yellow (5Y7/10), and a small proportion of the collection (4.5%) perform green coloration (5GY4/6). (Table 1). In addition, 96.4% of fruit bunches, are considered orange-red of ripening fruit (10R4/10) and the remaining 3.6%, red color. The amount of fiber in the fruit bunch which produces 25% of inflorescence exposure in 75% (Table 2).

In other words, the inflorescence at anthesis time, is not completely enclosed in the protective bracts, which is enough to facilitate cross-pollination, either by insects (Entomophilous pollination) or by wind action (Anemophilous pollination), the fruit bunch retains the bract vestiges until fruit ripening.

A quality highlight of the collection is the absence of palms with androgynous inflorescence (having male and female flowers in distinct parts of the same inflorescence). (Tables 1 and 2). Given these concerns, 86.6% of the plants had female inflorescence cycle (97.3%) and is generally considered to indicate the ability to perform a prostrate stem, normal phenomenon in this species. (Figure 2).

In addition, the leaflets of E. oleifera species are regularly distributed along the rachis and inserted on a single plane, opposite to the insertion of the leaflets of the palms of the E. guineensis species, which are inserted at several planes (Corley & Tinker, 2003; Moreno & Romero, 2015). (Table 1, Figure 3).

Petioles and leaves performed green pulvinules, which is an indicator of the low variability of the work collection, in these and other traits, while recognizing different states of green color, may indicate a nutritional deficiency. In the E. guineensis species, variations occur in these traits ranging from green to bright yellow (Corley & Tinker, 2003; Moreno & Romero, 2015), (Figures 4, 5).

Finally, the presence of Cercospora sp. widely distributed in all palms collection, was only identified in lower leaves, those already fulfilled their mission to feed and sustain a fruit bunch, and were also close to the artificial pruning, which is established once or twice a year. (Figure 6).

Respectively, the low variability collection is explained in large part due to their genetic origin and geographical location, as palm progenitor of the collection which were selected in cross-pollination populations of spontaneous growth in field conditions at Valle del Sinú in influence areas of the municipality of Cerete- Cordoba, Colombia. Although, the seed reproduction system of Nolí palm where cross-pollination predominates (allogamy), and this provides more accurate and reliable estimates of small cross-pollination populations, can be assumed the occurrence of pollinations amongst related American oil palms (family) with common ancestors, generating populations with some degree of introgression of various traits. Presumably, 11 of the 59 characterized progeny were produced by auto-pollination and 10 are open-pollinated but with high probability of their seed production overcoming by crossing among neighboring palms with some degree of partnership.

The dendrogram (Figure 7), represents the ranking of 59 accessions respect to other in relation to the thirteen (13) descriptors evaluated. (Table 1).

Affinity, 58 of 59 accessions from the collection work were arranged in three groups, and a fourth group, separated by their difference with the rest of accessions. According to the grouping, the work collection of Nolí palm can be described as follows:

Group 1: This group was formed by 21 accessions which represent 35.6% of E. oleifeira population. In this group, 11 accessions were obtained by auto- pollination, the other 10 accessions, performed an open pollination, although can assume had some degree of inbreeding. Figure 2, exhibits the Nolí palm fruit and fruit bunch development and growth stage of Nolí palm, for the color of unripe fruit, 55.4% of the accessions of this group, produce yellow fruit, mustard yellow fruit 38.4%; while the color of red-orange fruit is fully mature in 96.6% of cases, and 3.4% is yellow. (Figure 3). An important trait, corresponds to 83.6% from palms belongs to accessions of this group which performed the emission of female inflorescences with little fiber and only covers 25% of the inflorescence. (Figure 4). On this base, this can lead to establish 75% of the remain exposed to favoring cross- pollination, whether by pollinating insects or in a lesser extent, by wind (Table 4) while 14.4% had 50% of coverage at anthesis time. Consequently, for the inflorescence trait, 6.7% of the evaluated palms are prolific, and 8.4% are hermaphrodites which produce inflorescences with 84.7% in normal conditions

Group 2: Consists of 35 accessions representing 59.3% of the American oil palm population. The palms of this group are characterized by the following traits: Those palms which were obtained by controlled crossing amongst other selected palms in cross-pollination populations. In immature fruit bunch stage, 67.3% of the American oil palm fruit bunches produce mustard yellow fruit, yellow fruit (30.3%), (1.2%) green, and yellow-green (1.2%). Of these fruit arrangement, though it is considered as a (99%) mature red-orange, yellow (0.7%) and (0.3%) red. (Figure 4). However, 7.6% of inflorescences, performed 50% coverage and 0.3% had 75% inflorescence coverage.

Group 4: This group represents one obtained accession by controlled crossing among selected palms in cross-pollination populations in full plant breeding program. The American oil palms of this accession, in unripening fruit stage, produce fruit bunches with green color (100%), which become yellow (100%) at total fruit ripening stage. In addition, the American oil palms of groups 1 and 2, emit low-fiber female inflorescences around, only covers 25% of the inflorescence, 11.1% had hermaphrodite inflorescences. (Figure 4).

Morphological characterization of 59 accessions provides more accurate and reliable estimates of the American oil palm variability in the germplasm collection existing in El Mira Corpoica and its close relation among accessions in 4 cluster groups which were generated by affinity.

Therefore, from 13 qualitative descriptors evaluated, five, had a high discriminant power: type of reproduction, color of unripening fruit bunch and color of ripening fruit bunch, envelopes percentage of fibers and exposure percentage of inflorescences. In the work collection of Nolí palm, easy observation descriptors were used and facilitate a more precise understanding of low phenotypic variability performed in the 59 evaluated accessions. Specifically, a characterization with quantitative production has become imperative due to the variability observed in the work collection of Nolí palm. 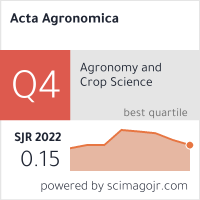