FIRST APPROACH TO THE TROPHIC ECOLOGY AND DIET OF THE RAINBOW RUNNER, Elagatis bipinnulata (QUOY & GAIMARD, 1825) (PISCES: CARANGIDAE), IN THE CENTRAL COLOMBIAN CARIBBEAN

The rainbow runner (Elagatis bipinnulata) scores high in trophic level (4.24) but it is not a voracious fish (Q/B = 10.8). Its diet is dominated by the dwarf herring (Jenkinsia lamprotaenia), eats more in the dry season, than in the rainy season and significantly more in the afternoon that in the morning suggesting preference for daylight feeding.

FIRST APPROACH TO THE TROPHIC ECOLOGY AND DIET OF THE RAINBOW RUNNER, Elagatis bipinnulata (QUOY & GAIMARD, 1825) (PISCES: CARANGIDAE), IN THE CENTRAL COLOMBIAN CARIBBEAN

The rainbow runner (Elagatis bipinnulata) scores high in trophic level (4.24) but it is not a voracious fish (Q/B = 10.8). Its diet is dominated by the dwarf herring (Jenkinsia lamprotaenia), eats more in the dry season, than in the rainy season and significantly more in the afternoon that in the morning suggesting preference for daylight feeding.

The rainbow runner (Elagatis bipinnulata) is a medium sized, oceanic and neritic, epipelagic fish of circumtropical distribution with intrusions into subtropical areas (e.g. Romanov, 2001). It is a highly migratory (Saito et al., 1999) and swift swimming fish (Brunnschweiter and Sazima, 2010). Qualitative references to the diet of the rainbow runner describe it as a piscivore, eating small pelagic fish (Hiatt and Strasberg, 1960; Yukinobo, 1998). However, the diet is complemented by a long list of zooplankton and pelagic invertebrates including copepods, gastropods, amphipods, Sagittidae, Euphaciacea, Thaliacea, Siphonophora, shrimps and crabs, stomatopods, polychaeta, cephalopods, fish eggs and even insects like Halobates sp. (Senta et al., 1993).

There are few truly quantitative descriptions of the diet of the rainbow runner. One exception is the study by Vaske et al., (2006) in the mid-tropical Atlantic (the Saint Peter and Saint Paul archipelago). They found a diet that included 27 taxa, dominated by flyingfishes (Cypselurus cyanopterus and Exocoetus volitans). Vaske et al., (2006) suggested that E. bipinnulata eats both in daylight and in the night, but did not address seasonality. Dambacher et al. (2010), estimated a trophic level for E. bipinnulata of 3.59, which places it as an intermediary predator, and Opitz (1996) estimated a consumption to biomass ratio (Q/B) of 9.8 (recalculated from data in Opitz (1996), Appendix 8.7, Table 8.7.1 with the same empirical model as used here, see below. Originally 7.9) which is relatively low.

In Colombian Caribbean waters the rainbow runner, locally known as “salmón”, is a common member of pelagic-neritic assemblages (Garzón and Acero, 1983; Grijalba-Bendeck et al., 2004; Reyes-Nivia et al., 2004), is also associated with artificial reefs (Delgadillo et al., 2004; Delgadillo-Garzón and García, 2009), and is targeted in the fishery (Criales- Hernandez et al., 2006; Castro et al., 2007). In the study area (see below), the rainbow runner is fished actively year round with a notable increase in landings from January to April, which corresponds to the dry season. It is not, however, the main pelagic target species either regional or locally (García, 2010). This study presents the diet of the rainbow runner, reports its Q/B and trophic level and determines whether season (dry vs. rainy season) and the time of capture (morning vs. afternoon) influence diet.

Sampling was done in Taganga Bay and the National Natural Park Tayrona (NNPT), situated on the Central Colombian Caribbean Sea (11°21‘00”-11°15‘33”N, 73°54‘06”-74°12‘ 33”W). This coastal zone is influenced by the Caribbean Current, generated by the trade winds (“Alisios”), and the Panama-Colombia Countercurrent, and is characterised by seasonal upwelling during the dry season that extends from December to April (Ramírez, 1990; Andrade, 2001). Fishes were captured by artisanal fishermen with beach seines and by trolling from March 2003 to May 2004 at approximately monthly intervals, thus covering the dry (December to April) and the rainy (May to November) seasons. Times of capture were before and after noon, but no nocturnal samples were taken. Individuals were weighed, measured (fork length in cm) and their stomachs were immediately removed and injected with a buffered solution of ethyl alcohol (70 %), neutralised formaldehyde (10 %) and marine water in proportion 4:1:3. The stomachs were refrigerated until analysis. Prey items were identified to the lowest possible taxonomic level and weighed (wet weight). Unidentifiable stomach material was excluded in percentage weight calculations and general categories like “teleosts” were distributed proportionally among identified fish species or genera (see Abarca-Arenas et al., 2007 for a similar approach). The consumption/biomass (Q/B) ratio was estimated by means of an empirical model proposed by Palomares and Pauly (1998) that for carnivorous fishes is:

where W∞ is the asymptotic weight of the individuals (wet weight, in g), Tc is the mean annual habitat temperature for the fish population in question (in ºC) and A is the aspect ratio of the caudal fin (unitless). The asymptotic weight (5814 g) was estimated considering the maximum size of rainbow runner found in the study area, using the relation proposed by (Pauly, 1986):

Sea surface temperature was recorded between September 2002 and March 2004 in Taganga Bay (n = 57, mean 26.8 °C, mercury thermometer, precision ± 0.1 ºC) to obtain mean annual habitat temperature. The aspect ratio (A) of the caudal fin, a measurement of fish activity (Pauly, 1986), was estimated as:

where h is the distance between the upper and lower lobule and s is the surface area of the caudal fin (n = 22, mean A 4.7). Fins were projected on millimeter paper to estimate s. Trophic level (defined as the weighted mean trophic level of prey items plus one) of the rainbow runner was estimated using the application TrophLab (http://www.fishbase/ dowload/ TropLab2K.zip). See García and Contreras (2011) for a review of Colombian Caribbean fishes trophic levels. A permutation procedure (Good, 2006) was used to test whether mean weight of stomach content (including unidentifiable material and stomachs with zero content) was different (one tailed test) between seasons (dry vs. rainy season) and between time of capture (06 hours to 13 hours in the morning, vs. 13 hours to 18 hours in the afternoon). A routine for the effect was written with the program Statistics 101, v. 1.5.3 (http://www.statistics101.net/) whereby the data of the two groups to be contrasted are combined and resampled without replacement iteratively, the difference of the two resample means at each iteration is recorded and the percentage of time that this difference is equal or exceed the observed difference is taken as the p-value. Data were also analyzed by a two-way analysis of variance with the program Past (Hammer et al., 2001) that uses weighted means for unbalanced designs.

Because total length and/or fish weight may influence the contrasts in stomach content a correlation test (Pearson‘s product moment correlation) for the data set was run between those variables and stomach content. Bias corrected 95 % bootstrap confidence intervals were fitted to means. A total of 42 stomachs were collected, of which 35 contained prey represented by a limited number of species (Table 1, one stomach was excluded as its stomach content weight was an outlier). The main diet item was dwarf herring (Jenkinsia lamprotaenia) (75.13 % of contents by weight of which about 80 % was concentrated in the dry season), a small pelagic fish. The diet of the rainbow runner (seven diet items, Table1) in the Central Colombian Caribbean is sparse compared to that in the mid-tropical Atlantic, where 27 taxa were recorded (Vaske et al., 2006), or in the Pacific Ocean with at least 22 species of prey (Bocanegra, 2007). One obvious reason is the difference in the number of stomachs with food analyzed, 35 in this study versus 192 in Vaske et al., (2006) and 184 in Bocanegra (2007), as well as the much larger geographic area covered in Bocanegra (2007). Even so it is surprising that the local diet of E. bipinnulata was so heavily dominated by a single species (Jenkensia lamprotaenia). The extent to which local biodiversity influences E. bipinnulata remains unclear.

Mean total length and mean fish weight were higher both in the rainy season and in the afternoon than in the dry season and in the morning, respectively (Table 2). However, mean stomach content in the dry season was not no statistically higher contrasted to mean stomach content in the rainy season (p>0.05). Mean stomach content in the afternoon, on the other hand, was significantly higher than in the morning (p<0.05). Pearson‘s product moment correlation between stomach content and total length and fish weight turned out to be close to zero (-0.005 with fish weight and - 0.099 with total length). Thus, those variables do not exert an unduly influence in the above results. Two-way anova confirms the results above: no significant difference was found in stomach content between seasons (p>0.05) but a significant difference was found between times of capture (p<0.05). Interestingly a marginally significant interaction between season and time of capture was found (p = 0.08). This was so because of a total of six empty stomachs five were found in the dry season thus generating a huge variance. On the other hand, these five stomachs corresponded to fishes captured in the morning hours, which explains the marginal interaction found between season and time of capture.

The fuller stomachs of E. bipinnulata in the dry season cannot be tracked back to increased primary production normally associated to upwelling phenomena. The supply of nutrients in the rainy season due to continental discharges is not much different than nutrients supplied by deep water (Ramírez, 1990). Thus the upwelling manifests just as lower sea temperatures and higher salinities compared to the rainy season, but does not significantly influence primary production (Franco-Herrera et al., 2006). On the other hand inspection of the diet matrix suggests that the main diet item, the dwarf herring (J. lamprotaenia), exhibits a seasonal presence in the stomachs of E. bipinnulata with maxima in the dry season. In balance, both the quantitative and qualitative observations of the diet of the rainbow runner suggest a correlation with climate.

The trophic level for E. bipinnulata found in this study (4.24) exceeded that reported by Dambacher et al., (2010) for the Pacific Ocean (3.59), and may indicate that system-level biodiversity plays a role in both diet and trophic structure. A less diverse system might support a less complex trophic structure, which would allow E. bipinnulata to occupy a higher trophic niche (e.g. Duffy and Stachovicz, 2006). Consumption to biomass ratio was 10.8, which means that E. bipinnulata eats its own weight 10.8 times a year. The difference in Q/B value between the original value in Opitz (1996), 7.9, and this study may be due in part to differences in the models used (a model by Palomares and Pauly, 1989, was used by Opitz; a model by Palomares and Pauly, 1998, was used in this study). In fact, García and Duarte (2002) found that the Q/B values estimated with the Palomares and Pauly (1989) model were consistently smaller than those estimated with Palomares and Pauly (1998) model. Once recalculated (Q/B= 9.8) the difference gets shorter, but Opitz (1996) value is still below the Q/B in this study. These values suggest that E. bipinnulata is not a voracious fish. García and Duarte (2002) found a mean trophic value for carangids of 12.3, at mid way in a list of over 60 families. The rainbow runner eats significantly more in the afternoon than in the morning (Table 2). Fuller stomachs in the afternoon suggest that the rainbow runner is eating during day light, at least in our study area. Further observations are needed to discern among the web of variables and time dynamics involved and to decide whether causal relationships exists and which are them in the shaping of the diet of this fish.

Comments by two anonymous reviewers helped to improve the manuscript. 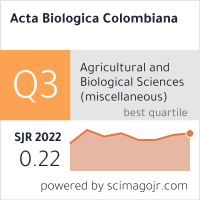 All articles published by Acta Biológica Colombiana are licensed under the Attribution-NonCommercial-ShareAlike 4.0 This license lets others remix, tweak, and build upon your work non-commercially, as long as they credit you and license their new creations under the identical terms.