THERMOKINETIC STUDY OF THE ZERO, FIRST AND SECOND ORDER REACTIONS IN A PSEUDO-ADIABATIC CALORIMETER: Numerical approach and experimental dat

The signal produced by a pseudo-adiabatic
calorimeter is simulated by numerical
solution of the differential equations that
model the chemical kinetics [1], the thermal
properties of the calorimetric cell
[2], and the response of the thermistor
used as a thermometric sensor [3]. These equations show that the calorimetric
signal is related with concentration
in a complex way. Therefore, a comparison
between the signals of the three
basic kinetics reactions (zero, first and
second order) was made, as a first step
to obtain a standard procedure to follow
chemical kinetics using a calorimeter. In
order to help understanding this relationship,
the initial rate method was applied to the simulated data to assess the relationship
between the order and the kinetic
constants calculated with those used
for the simulations. As it was expected,
the initial rate method for the calorimetric
data, do not give a slope directly related
with the order of the reaction, as it
would be produced, for example, in data
from a spectrophotometer. However, a
linear relationship was found between
what we call the “calorimetric order”
and the kinetic order. Finally, the developed
procedure was applied to the study
of the H2O2 decomposition catalyzed
with Fe3+ in homogeneous phase and
with activated carbon in heterogeneous
phase, finding the order and the kinetics
constants of the global processes, which
were in close agreement with those in
the literature. 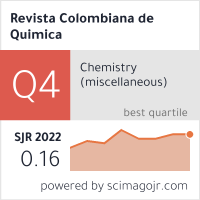